Health status of the population of HB county in 2018

In 2000 and 2018 the population of Hajdú-Bihar county was characterized by an irregular distribution age-tree (Figure 1), according to which children (0-10), young middle-aged (30-35) and 80-year-olds numbers were low. During the examined period in the age composititon of the population the proportion of elderly has increased meanwhile the proportion of youths has declined. According to the age group distribution of the county’s population, the proportion of juveniles (aged 0-14) and elderly (over 65) is approximately the same (15% and 17.7%). The share of the working age group (15-64 years) is the highest (67.3%). 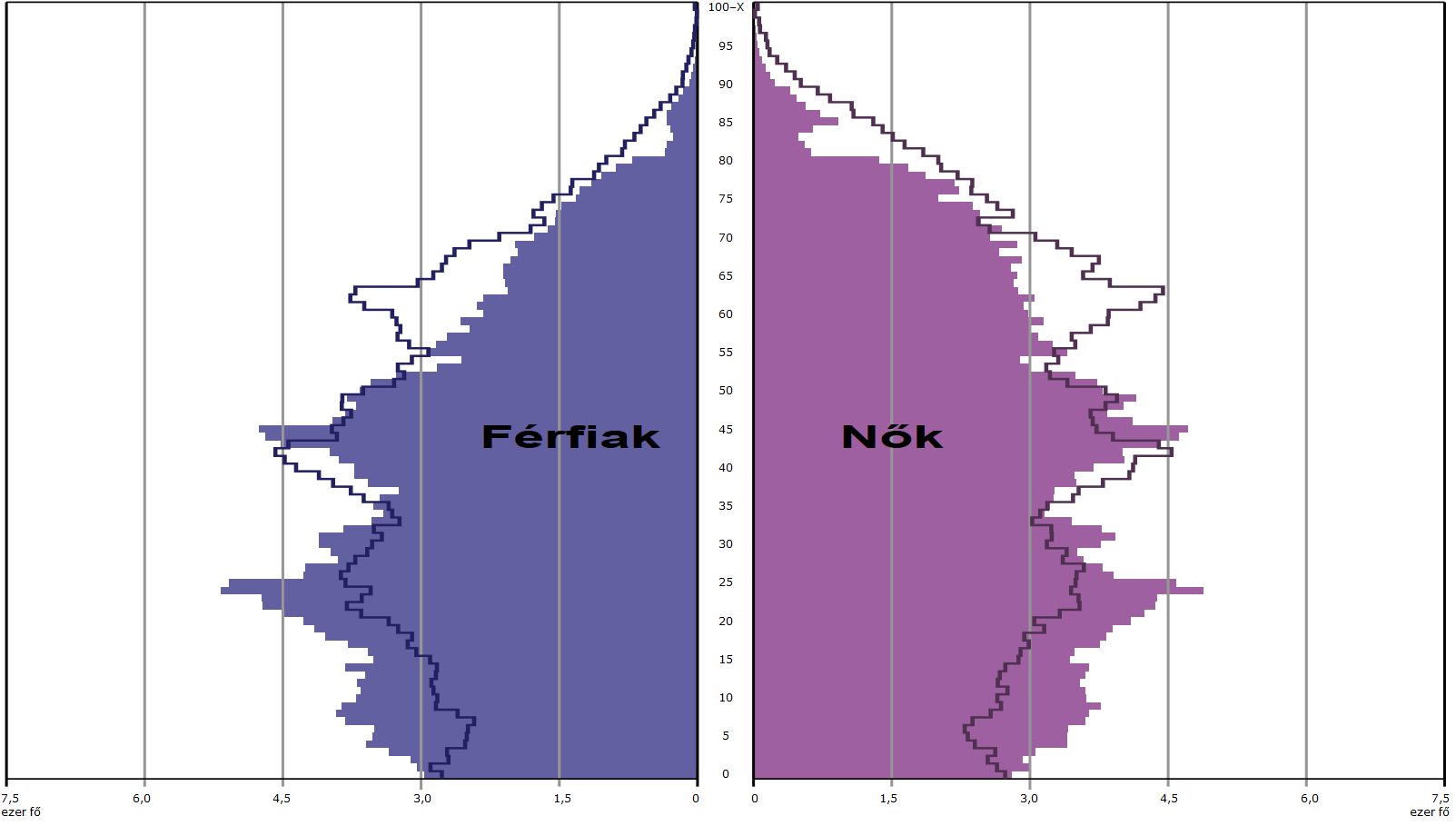 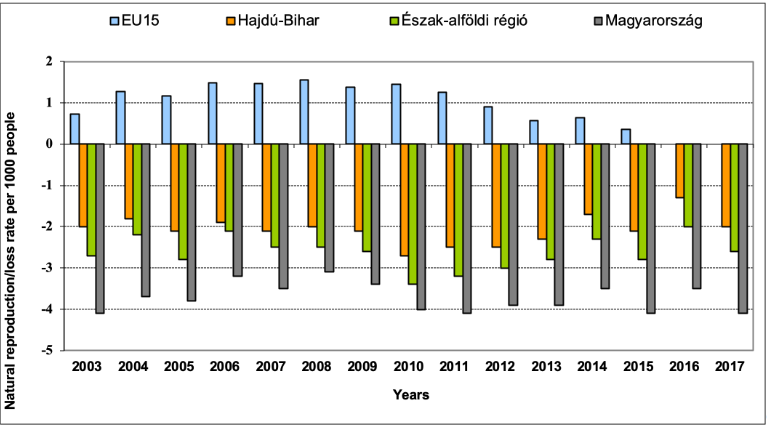 From public health point of view, the Family Protection Service, which operates in 5 locations of the county, plays a prominent role. In these places the family health visitors provides official tasks in connection with interrupting pregnancy.

Home professional care is possible if the patient’s medical condition – not bound to any medical education – requires hospital care, but can be replaced with home care benefits.

In Hajdú-Bihar county, patients who are no longer in need of regular medical care but needs permanent care can be provided in 3 institutions besides the above mentioned inpatient care institutions: in Hajdúnánás Hospit Care Institution, 50-50 beds in Nursing Department operated by „GONDTALANUL” Service Non-profit LLC, and 10-beds in Turnaround Addiction Rehabilitation Institute, which provides rehabilitation care for addicted men volunteering from the Northern Great Plain Region.

One of the first environmental factors affecting the population are water and drinking water. The drinking water supply of the county’s settlements is adequate from quantity point of view.

In 2018 in the county there were 84 public drinking water supply system in operation.

Due to the nature of the water source, the supplied drinking water is primarily stratified water, while the East Main Canal Surface Water Treatment Plant allows the removal of drinking water from the  Canal as a surface watercourse. In Hajdú-Bihar county, 4 settlements are supplied with drinking water only by surface water (Balmazújváros-Nagyhát, Debrecen-Nagymacs, Debrecen-Ondód, Nagyhegyes). The city of Debrecen and its parts (with the exception of Debrecen-Nagymacs and Debrecen-Ondód) are supplied with mixed water – surface water and groundwater. Other municipalities provide drinking water from deep-drilled wells. The drinking water of sufficient quality and quantity is a national value. Drinking water, intended for human consumption must not contain any hazardous chemical, physical or microbiological contaminants, but must contain the components necessary for the human body. In the county, there has been no drinking-related disease in recent years.

The necessary examinations by the authority has been carried out before opening in the seasonally operating public baths and during the year in the continously operating public baths. Public swimming pools have the basic personal and material facilities, and the pools and service rooms are in good technical and hygienic condition.

There weren’t any serious public health issues in the public baths with pools and further there wasn’t any bathing water disease or suspicion of it.

The only natural spa of Hajdú-Bihar county is the Látóképi Tófürdő, which didn’t have any contamination during its season.

Due to allergic diseases, the Department of Public Health is treating the monitoring of biological atmospheric allergens as a priority. More than 30 plants and 2 mushrooms concentrations of pollen and spores are monitored at the stations. Among the allergens (ragweed, grasses, wormwood), pollen dispersal of ragweed is significant.

Discipline remained unchanged with regard to mandatory age-related vaccinations, ranging from 99 to 100 percent. High vaccination rates ensure that the major childhood infectious diseases that are preventable by vaccination have not occurred in Hajdú-Bihar county for many years. An international vaccination center has been operating in Hajdú-Bihar county (Debrecen) since June 24, 2017. In 2018 113 people have requested this health service.

Early detection of diseases can be solved by screenings. Organized, targeted screening is the most effective tool to detect cancer and reduce mortality.

Breast screening has been in operation since 2002 in the country. There are 2 accredited mammography screening stations, whose are performing targeted population screening in a 2-year cycle on a call-in basis.

Cervical cancer screening has been operating in the country since 2003. For women aged between 25-65, the screening cycle is 3 years. Screening is done in two forms, through specialist or health visitor screening.

Colon screening has been a model program since 2009. The population aged between 50-70 years is planned to be screened in a 2-year cycle. After successful completion of the training, the screening is done by general practitioners.

The health of the population is influenced by many external factors, but it is directly linked to the lifestyle of the individual. Known risk factors include smoking, alcohol consumption, unhealthy foods, sedentary lifestyle, or severe stress.

By clicking the icon, you can find the name and website of institution: